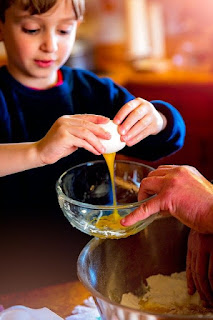 As you read through this blog and our upcoming online magazine, you will most certainly come across cooking terms that you are not familiar with. That's ok, we've broken them down here for you to refer back to as often as needed!

Au Gratin topped with crumbs and/or cheese then browned in an over or under a broiler.

Au Jus served with its own juices.

Baste to moisten food during the cooking process with pan drippings or a special sauce in order to add flavor and prevent the meat from drying out.

Blanch to immerse in rapidly boiling water and allow to cook slightly.

Cream to soften a fat, especially butter, by beating it at room temperature.

Crudites as assortment of raw vegetables that is served as an hors d’oeuvre, often with a dip.

Degrease to remove fat from the surface of soups, stews or stocks. Item are usually placed in the refrigerator, allowing the fat to harden for easy removal.

Fold to incorporate a delicate substance, such as whipped cream or beaten egg whites, into another substance without releasing the air bubbles.

Glaze To cover with a glossy coating, such as melted jelly for desserts.

Julienne to cut or slice vegetables, fruits or cheeses into match shaped slivers.

Marinate to allow food to rest in a liquid in order to tenderize it and/or add flavor.

Meunière dredged with flour and sautéed in butter.

Parboil to boil until partially cooked; to blanch.

Pare to remove the outermost skin of a fruit or vegetable.

Poach to cook gently in hot liquid kept just below the boiling point.

Purée to mash foods by hand by rubbing through a sieve or food mill or by whirling in a blender or food processor until smooth.

Refresh to run cold water over food that has been parboiled in order to stop the cooking process.

Sauté to cook and/or brown food in a small quantity of hot shortening.

Scald to heat to just below the boiling point.

Sear to cook the surface of quickly with intense heat.

Simmer to cook in liquid just below the boiling point. The surface of the  liquid should be barely moving, broken time to time by slow raising bubbles.

Steep to let food stand in hot liquid in order to extract or to enhance favor.

Toss to combine ingredients with a repeated lifting motion.

Whip to beat rapidly in order to incorporate air and produce expansion in heavy cream or egg whites.

A Word About Links